Our wedding was up in Banner Elk, North Carolina. It's in the Smoky Mountains, more like the High Country. So I stuck with that theme. 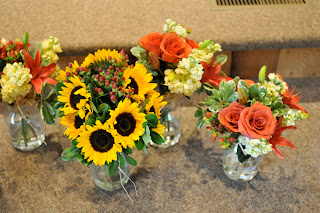 The bouquets were one of my favorite things. The berries in my sunflowers added some texture. And the bridesmaid bouquets had the perfect shade of peach/rose roses. They were even better than what I hoped for. 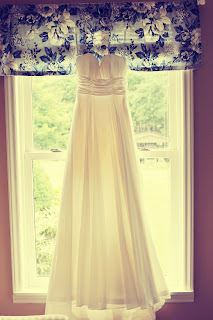 Here's a little shot of my dress. I fell in love from the moment I saw it.  I never even tried it on before I bought it! Simple, no beading, no crazy stuff. Chiffon, empire waist, satin band around the middle. It even looked like summer to me. 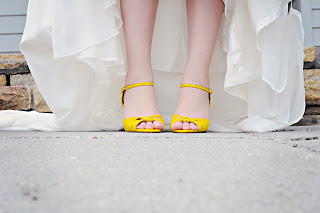 I had to throw in some color. A cute pop of yellow whenever I lifted my dress up was just what I wanted.

I honestly had no idea what I wanted to do with my hair. I figured wearing it down would be too casual, so up it was. A sunflower too, to match. 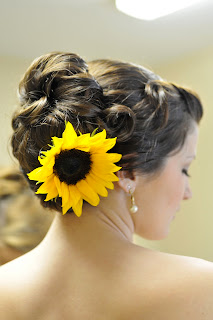 Taylor of course was going to wear his mess dress.  As were all of the other military boys at the wedding. Which happened to include both of our dads, my grandfather and all of their 234023984 medals, and some brand new butter bars.

For our ceremony we kept it simple. My church is nestled in between some gorgeous green hills. Perfect location. And inside there are floor to ceiling windows all of the way down. There's my decoration. So it wasn't too bare inside, we added some greenery on the ends of the first six rows, and large flower basket up near the alter. Same flower assortment as the bouquets.

These were the programs for the ceremony. It took forever to find the right paper and layout, but I was very happy with them.  Tied with some twine that added a country feel. They were all set in a big wicker basket. 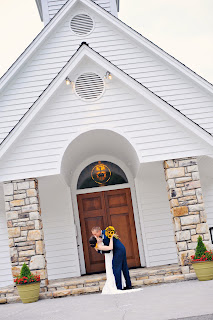 This was the outside of my church. The stones and large wooden door were perfect. 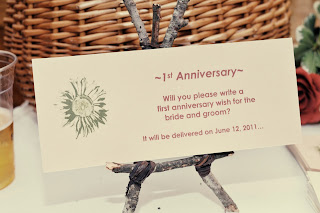 This was my mom's idea. Everyone wrote little messages to us that we'll read on our first anniversary. Excuse the beer in the background. Mom also made the little stands out of twigs and twine.  Also, the cards with the green sunflower were the same as our wedding invitations. They were vertical, but same design. All wrapped up in a soft green envelope. 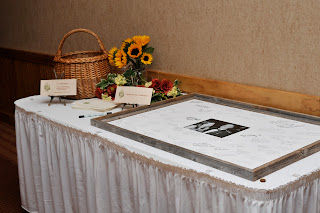 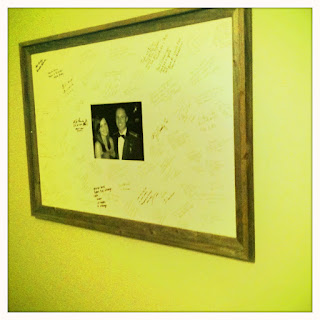 Instead of a normal guest book we decided to do a frame where people could write on the matte. We figured no one really does anything with a guestbook anyways. I found a barnwood frame at Hobby Lobby. Now, this hangs in our house. 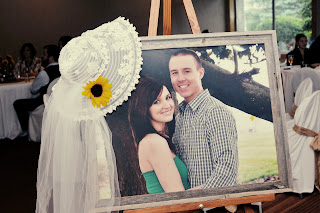 We had this at the entrance to our reception. I've never seen a picture of me that big. Ah. The frame again made out of barnwood.  The hat hanging on the end is my mother's. She wore it at her wedding. She pinned a little sunflower on it to tie it in. One of my other favorite things about our wedding.

These were our wedding favors. Small mason jars filled with homemade apple butter or apple jam. We still have some in our pantry to this day. Looks like we made too much! 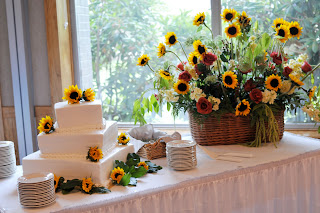 This was our little cake setup. Nothing fancy. 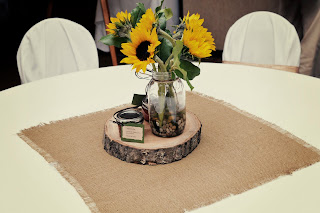 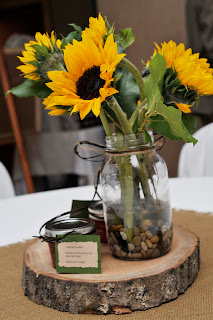 Our cute little centerpieces. Our neighbor is handy in just about everything. He took the time to slice up some logs. Mason jars tied with twine and filled with river rocks, stuffed with sunflowers, topped the wood. Under the centerpieces, my mom cut and sewed squares of burlap fabric. Cute and country. 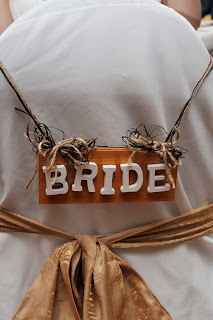 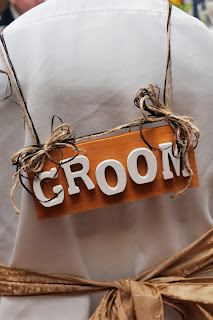 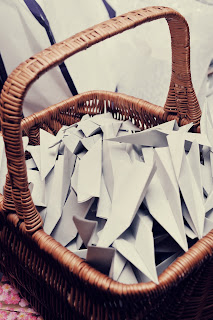 Instead of the usual rice, birdseed, rose petals, sparklers, party poppers, I wanted to do something different. I came up with idea of using little paper planes.  Everyone loved the idea. My sweet brothers-in-law folded every last one of these! We put them in wicker baskets and my little cousins handed them out before we made our exit.

I forgot to mention the music we had at our ceremony, which was probably the biggest hit. Every single person came up to me and told me how perfect the music matched our country wedding. I am blessed with incredibly talented friends. One of whom is Nick Mallis, an amazing musician. I previously sang with him in Florida in a folk group and asked if he would play at my wedding.  Luckily, it was just before the start of his second tour. I gave him complete control over the music, but said to make sure to include Iron & Wine's "Love and Some Verses". The whole set couldn't have been better. There were only three musicians, Nick playing guitar, and two other guys, one playing banjo, the other playing the Congo drum (I think it's called).  I specifically remember in rehearsal, when we practice making our exit of the alter, hearing our 'exit music' for the first time. It was the most happy sounding mix of instruments I had ever heard. Every one loved them.  There group name is Yo Soybean and you can find them on Facebook and Myspace.

Well, just a little trip down memory lane for me. An incredibly day. Coming up on a year of marriage this June. Blessed.

-B
A blog about the important things in our family; design, food, and Baby.